The latest installment of the
Para-Earth Series... 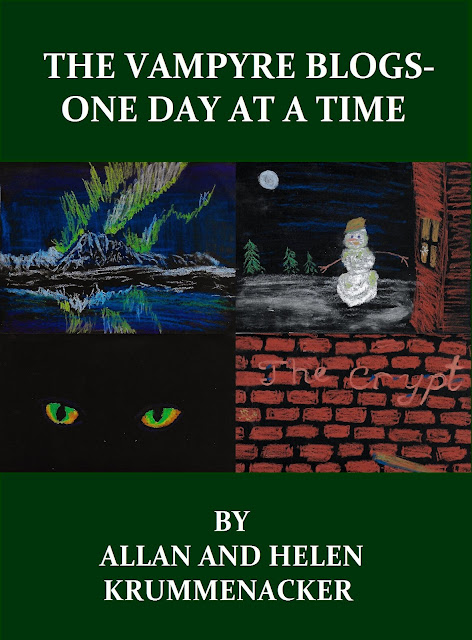 - Starring all your favorites from this blog and"The Vampyre Blogs: Coming Home"

- Including guest appearances by characters from our other titles"The Bridge" and "The Ship"along with a host of all new characters!

Posted by Allan Krummenacker at 10:07 AM No comments:

Email ThisBlogThis!Share to TwitterShare to FacebookShare to Pinterest
Labels: "The Bridge", "The Ship", "The Vampyre Blogs - One Day At A Time", #anthology, #comingsoon, #ParaEarths, #preorders, #series, #shortstory, #vampire

Things I Learned Writing An Anthology - Part I

Last night Helen and I finished the final story for our upcoming anthology.

Thank you!  Thank you!  You're all being too kind.  But today's post is not to talk about the anthology itself, as much as what went into making it.  How did it differ from writing full-length novels?  Was it easier?  Was it harder? What was the process like?  Where did we get all the stories for it, etc.?

Well, for starters, coming up with a decent number of stories was and wasn't hard really.  Helen had been writing stories long before e-books and well before I tried my hand at penning a tale.  I can easily say I learned so much from her earlier attempts at getting published, and let me tell you she got damn close to seeing some of her work in print.  But, that's a tale for another entry.

What I want to say is that I learned a lot about what to expect when I decided to try  going the traditional published route.  Although in my case, I started shortly after the birth of e-publishing and after 2-3 years of trying to get an agent to represent and hearing over and over again "You've got something here, but you crossed several genres and I wouldn't know what publishing house to try and sell it to."

You see, at that time (and this still seems to hold true today) publishers don't like to take risks on unknown authors or mixed genres. They want a straight up "Mystery", "Thriller", "Horror", "Science Fiction", etc.  They're not keen on trying to sell a book that crosses multiple genres like the Para-Earth Series which we classify as "Paranormal/Sci-Fi".

Now some of you may be pointing out that they do it more often these days, but most of those authors are well-known like Stephen King, Dean Koontz, J. K. Rowling, etc. who all have proven sales track records.

Anyway, getting back to how our upcoming anthology came to be a reality
.
During that 2-3 years I tried to get published the traditional way, more stories were taking shape.  New characters and ideas were forming.  One of them was vampire I called Nathan Eoghan (pronounced Ewan) Steward.  I swore I'd never do a vampire character, unless I could introduce new angle or angles to the character.  Yet I still wanted to keep a lot of the traditional trademark strengths and weaknesses people have come and know and recognize.

By this time, I had already been blogging for several years and had learned from other writers the concept of giving sneak peeks into upcoming works, and even sharing short stories.  This is done to introduce characters and concepts to prospective readers and build a demand for them.  So, after creating a vampire character that would fit nicely into our paranormal/sci-fi concept, I began doing short stories with Nathan over on a new blog called "The Vampyre Blogs - Private Edition".    Over the course of 3 years we had a number of tales about Nathan and introduced a number of his friends who appeared with him in "The Vampyre Blogs - Coming Home".  And we're still making new stories.  And that presented a problem, how many people want to wade through 4-5 years of blog posts to read all those stories?  Furthermore, most of those tales are rough 1st drafts and it shows.

During this time, I noticed some of my fellow authors who had created short stories on their blogs were bundling them into anthologies and that got us thinking.  With all the stories we'd already created, why couldn't we create an anthology centered around all those stories on the blog?  While it sounded nice and easy, it also didn't feel completely right to me.  While having all those earlier stories put into a more convenient format, shouldn't we give the readers more?  Shouldn't there be new never before seen stories in the collection?  Furthermore, should the stories not be just about Nathan but his friends, and even characters from our first two novels "The Bridge" and "The Ship"?

This led to Helen coming up with the idea of recycling some of her earlier works which were firmly established in the realm of the macabre.  With a little reworking and adding scenes, she felt a number of those pieces could easily fit in with our Para-Earth Series, while also giving those unread tales a chance to finally see the light of day.

*Now I want to pause and say one thing.  Remember how I told you all, many posts ago, never to toss out your unfinished works, or fragments because you never knew when they might fit into some new idea/concept?  This is a perfect example of why you do that.  You just never know when that day might come.*

So right there, we had some brand new stories to slip into the anthology.  But we didn't stop there, we went ahead and created several more brand new stories just for the collection itself.  The result?  One third of the tales appearing in this anthology are completely brand new.
Plus, we also added an afterthought following each story, sharing some of the who, what, where, and how each tale came into existence.  We thought it only right to share some of what the writing process can be like and hopefully inspire others to take that next step in whatever creative endeavors they are involved in.

Now, seeing how long this entry is getting and knowing there's still a lot more to share, I'm going to end this one here.  I know I covered a lot of background areas today and haven't really gotten to more of the technical and details of actually what went into the building of the anthology.  But rest assured that will be covered in the next installment.

Until then take care and keep writing everyone.
Posted by Allan Krummenacker at 9:41 AM No comments: