Another Glimpse Into Our Upcoming Anthology...

*Update from Allan: Last week, while awaiting the arrival of a replacement laptop for me, our desktop computer gave up the ghost. This left us with just Helen's laptop which she needs for college accounting courses. So our release date for "The Vampyre Blogs - One Day At A Time" has been pushed back until "Twelfth Night" or January 5th, 2018. We chose this because with the holidays coming we will have a harder time getting things done like beta-reader testing, edits, artwork finished, cover art, and formatting the book. Furthermore, December is notoriously a bad time for independent authors to get much visibility due to the big publishing companies dominating advertising for the Christmas rush.
In the meantime, here is another sneak peek into the anthology. This installment is one that I feel really shows off Helen's skills in setting, mood, and storytelling. We hope you enjoy what you see and we'll keep you posted on when pre-orders will be available. Happy reading everyone...

THE EYES UNDER THE SOFA

Tim was bored. It was another long summer day in a summer that was made ever longer by their move to a house in the country. He didn’t know any kids in the area, and even if he did, it wouldn’t make any difference because it was too far to walk anywhere if he didn’t tell his folks where he was going first. That was unfair. It was unfair, too, that they had moved in the first place. He couldn’t believe his folks actually thought he’d like it out here, where there was nothing for miles but rocks and trees, and stupid hick people, and dirt and snakes.
Nothing happened out here. At least, nothing exciting. Back home (home was still the city, this was just the new house) there were games in the street, and rollerblading on the sidewalks. If you bladed fast and were quiet, you could go right past the old folks carrying home their groceries, and scream at the last minute so they’d get scared and drop them. And sometimes one of the older kids would get in a fight and get cool bandages. And you could hear fire engines and police sirens and ambulances.
Out here all you ever heard was the wind in the trees. It didn’t even sound the same as wind did back home, gusty and thudding. It was like being at the ocean, all the noise dying into a murmur. He could hear himself breathe. He could probably hear Killer breathe.
Killer was Tim’s cat. Killer was all black, so when he was in a dark place, all you ever saw were two shining eyes. He usually did hide in dark places, too, under furniture, so that he could reach out from underneath to attack passing ankles. There was a dangerous sort of energy in that cat, the strength, the obsession, the ruthlessness of an army compacted down into a twelve pound package-- at least when he wasn’t curled up in a lap or taking a nap.
If Tim could find Killer, they could play. Killer got bored out here, too. No more cockroaches to kill and carry around in his mouth. Not that he shouldn’t be able to find enough other disgusting little things to play with out here. But he hadn’t been himself since they moved a month ago. He was shying at corners, sniffing and bristling as he looked at empty spaces.
Tim laughed. “Killer, are you afraid of the bogeyman? Didn’t you know mom and dad moved us out here ‘cause it’s safer?” Sure it was safer. Mom hadn’t liked it when he’d told her about the neat pistol Bobby had brought to school last May. But here the guys probably all had hunting rifles. “Killer, where are you?”
Scuffling came from the family room. That was where all the comfortable furniture was, the stuff that had come with them from the city. The stuff in the living room was all ‘country’, which his mom liked and he would like to make kindling of. That was an idea, Tim told himself. We got a fireplace now.
Tim went in search of the scuffling noise. Maybe Killer had found a rat. He could take it and put it where his mom would find it and maybe she’d be so grossed out they could move back home. Not likely.
He could hear the noise more clearly. It was coming from under the big, fluffy sofa, and it was kind of a growl, repeated once in awhile, and a lot of scuffling and scratching. Yeah, Tim thought, Killer’s found a rat.
Dropping to his knees, he bent down and twisted his head so he could look under the sofa. It was tricky, because the furniture was so low. He had to almost lie against the hardwood floor to do it. But under the couch were two big yellow eyes.
“Killer,” Tim called, hesitating a moment. The eyes didn’t look real friendly. Of course, they wouldn’t-- not if Killer was really going after something...
Posted by Allan Krummenacker at 2:01 PM No comments:

The long wait to replace my now deceased laptop has unfortunately been extended due to circumstances beyond my control like, car registration, car repairs, books for my wife's college classes, etc.  Luckily I am on vacation this week, or rather a 'stay-cation' and am working hard to get our upcoming anthology edited and ready for beta-reading.  We hope to have this process completed by the end of this month.

In the meantime, with our time and resources being a little limited, we decided to offer the first sneak peek into the anthology itself.  We hope this peek will intrigue and delight you all, since it will be the first of several leading up to the day of the book's release.

So without further ado, here is a snippet from the first of the twenty plus tales that will appear in the collection we call:  "The Vampyre Blogs - One Day At a Time":

“A Letter To My Wife” 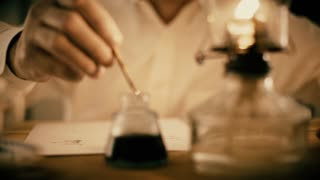 
I know you have been troubled by how distracted I seemed last we were together. I know I told you it was simply the weight of being responsible for not one but two companies of men. But with our division on the eve of what may possibly be the biggest battle we’ve faced to date, I feel it only right to explain myself in case I fail to return, especially with the approach of our firstborn mere months away. I want our baby to know that my thoughts were never far from home, nor was there a mistress or dalliance that had captured my heart. There has only been you and no other.

Actually, it is an old friend, whose unexpected return one cold night in January, who has occupied so much of my mind. Of course, you will correctly surmise that I am referring to young Nathaniel Stewart. After believing him lost at Mary’s Heights, his sudden reappearance weeks later raised more than a few eyebrows and murmurings among the men. But then it became clear he had come back to us not as a deserter, but as a hero.

Why did I not mention that last fact to you earlier? I have been under orders from the President himself to be remain silent on the matter, but with the war so unpredictable, and having recently just escaped death thanks to young Nathan, I feel it only right that you know everything.

As I already indicated, it began early this year, January 2nd. Night had fallen and my men had already turned in for the night when a carriage arrived. It had been stopped at the gate and then sent right through, which is highly irregular. Even Colonel ----, had not been notified of the late arrival, nor was he summoned to the meeting that followed. Instead our late night visitors came straight to my quarters.

Being a soldier, I am accustomed to being awoken at odd times, but upon seeing who my visitors were, I was so taken aback, I almost forgot to snap to attention. Discovering the President himself in your office wishing to speak to you, is not a position a mere captain is used to finding himself in. Even more shocking was finding a member of my company, and long time friend whom I believed had perished at Marye’s Heights, standing next to such our Commander in Chief.

“Nathan?” I breathed, before finally remembering my place and greeted the President smartly.
“At ease, Captain,” my superior instructed. “This meeting is of course not a social call, but a matter of great delicacy. It will help decide the fate of this young man.”

My legs nearly failed me. Seeing Nathan alive after nearly a month’s unexplained absence, I had feared that I would have to brand him a coward and order a firing squad come morning.

You know of course from long habit that in spite of the almost decade difference in our ages, I look upon Nathan as a younger brother. Perhaps, it was losing my own sibling, that I sought to fill the gap in my life created by his passing and Nathan was a good fit. Plus it was because of me he was able to join our company, in spite of his young age and sometimes questionable health.  So you can understand how the very thought of having to order his execution for desertion clutched my heart with an icy vengeance...

Posted by Allan Krummenacker at 1:51 PM No comments: