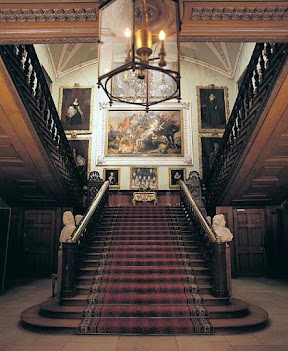 "It's started," Billings whispered and reached for my hand. "I must get you out of here..." But he was too slow. I was already bolting up the staircase, skirt held up high, taking two steps at a time.
"Miss Lisa, no!" I heard my companion cry as I reached the top of the stairs and bolted down the hallway. At one point I thought I heard my name called again, but it didn't sound like Billing's voice. But I wasn't really paying attention, because my focus was completely on what I was hearing and sensing from the room at the end of the hallway. Madeleine was still screaming at her brother and I could feel her anger... hell, who am I kidding. She was in a total rage and to make matters worse, she was getting even angrier.
Putting on a final burst of speed I raced into the governess' old room. The door to the schoolroom was partly open and I could see she had already grabbed Reginald by the arms and was shaking him. She was screaming in his face. I could see tears streaming down the boy's face as he struggled to find something to say that would make her stop, only he was too terrified to think straight.

Without thinking, I rushed into the room shouting, "That's enough, you're going to hurt him!" To my horror, neither brother nor sister seemed to hear me. In fact, they didn't even realize I was there. They were stuck in their cycle. The scene was going to play out to its tragic end right in front of me, if I didn't do something to interrupt it.

I don't know what possessed me, but I rushed forward and grabbed Madeleine by the arm. 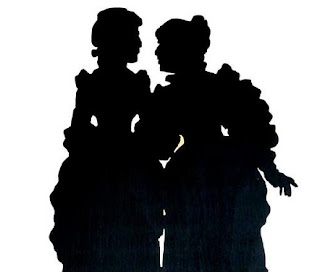 Immediately, she stiffened and slowly turned to face me. "What is the meaning of this? Who are you? And how dare you lay hands on me."

"My name is Lisa, and I'm... I'm..." I was about to tell her I was a friend of her brother, but I could see he was staring at me as if he'd never seen me before. I briefly thought about saying I was the new governess, but thought better of it. Instead, I decided on the truth. "I'm someone who has a younger brother, just like you."

Madeleine's eyes never left mine. "And you think that gives you the right to touch me?" she demanded.

"Only if it keeps you from accidentally hurting your little brother," I replied evenly and released her arm. "I know how much little brother's can drive you crazy. How they can be so irritating and annoying, that you want to just ring their little necks. But then I remind myself, I'm the elder child and I have a lot more experience with life than he does."

"Not that it counts for much in the end," she pointed out, almost sympathetically. "You're not the one people, especially men, will listen to. Nor will they ask your opinions on things. But your brother? Oh they'll ask him all kinds of things and cater to his whims, no matter how silly."

"That's still no reason to treat him like this," I replied, trying to keep my voice calm. The fact that she was even speaking to me was a good sign, I thought. Perhaps, I'd be able to reason with her and break the cycle.

"He knows where our mother's jewels are," she told me, obviously trying to sound reasonable. "I need them, I'm entitled to them..."

"So you can be with the man you love, I know," I finished gently.

If my interruption had annoyed her, she didn't show it. Instead she began to smile. "Yes. That's right. You understand. He loves me, he'll take good care of me. We just need to settle his debts and then we can marry. Look, he has already given me his mother's ring for our engagement."

She held out on hand and I could see the ring in question on her finger. It was an impressive piece of jewelry. 'Had he given a ring to any of his other victims?' I wondered. 'If he didn't, perhaps he really had meant to go through with the marriage. But if so, why?'

Meanwhile, she continued, "We are to leave this night and then later return here, as husband and wife. Together, we'll make this place a home for all three of us."

"The three of you?" I repeated.

"Of course," she looked at me as if I'd were a simpleton. "I still have to watch over my little brother. He's still too young to manage the estate on his own. And as you said just a moment ago, we are the elder child. It's our job to make sure we watch over our siblings. I'd never abandon, Reginald."

I had to admit, I hadn't expected to hear her talk like this. Could her betrothed have actually been serious about her?

"My Jonathan will be here soon," Madeleine continued, interrupting my thoughts. " In fact I think I can hear his carriage in the distance."

Without thinking, I found myself listening for the sound. She was right, there was a carriage coming. It sounded far off, but at the same time it was definitely drawing nearer. In fact, I could make out the sound of the horses hooves in the snow. Their steps had a certain rhythm that was very soothing. 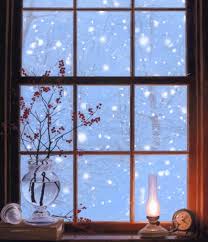 "Come with me over to the window," Madeleine whispered, letting go of Reginald in order to slip one arm around one of mine. "We'll be able to see the carriage in a little while."

I let her guide me towards the window in question. We were halfway towards the glass aperture, when suddenly, the image of Nathan landing on the fountain in a shower of glass loomed large in my mind. Immediately, I pulled away from her, or tried to. Only she was expecting it and had a death grip on my wrist. Still, I managed to pull us away from the window and back into the center of the room. I was between her and Reginald now and I could hear the boy breathing heavily behind me.

As desperately as I wanted to look back at him, I dared not turn away from Madeleine. Her grip on my arm had opened my eyes, in both the literal and psychic sense. There I said it. Nathan was right, I am psychic and boy was I seeing into a mind that had been twisted by an expert.

My original impression about Madeleine's anger at men had been right on the money. But it hadn't always been that way. She had been devoted to her father, brother and her uncle. It was only when she'd been denied her wish to marry that the resentment had taken hold, only to be fueled by her intended. From the glimpses I was getting from her mind, I could see he had all the classic traits of an abusive/manipulator. He had been putting her up on such a high pedestal that she had no clue as to what he had planned for her. I could even hear his words inside my head, praising her youthful wisdom and insights, and how angry it made him that others, including her own family, refused to listen to her. From there he helped foment her resentments,  encouraging her to defy their antiquated concepts of duty and propriety. Yet in spite of all this, she had grieved deeply when her parents had perished in the carriage accident. Her pain had been as deep for her father as well as her mother.

Perhaps, that was why her 'intended's' manipulations worked so well on her. After her loss, she had felt lost and confused, making her more vulnerable to his renewed insistence on their marrying soon, so he could quote "Ease her pain and sorrows..." Only her uncle became the new obstacle to that plan. So he began redirecting her resentment towards her guardian. And when he would not listen, she began working on Reginald only to become resentful to him as well after he took their uncle's side. Which had eventually led to the tragic events that in turn brought the three of us to this moment.

Finally, I found my words and said, "You still believe he will come for you this night."

"Of course," she beamed, which nearly made me shudder.  There was nothing warm or tender about that smile. "You see, I was telling you the truth about hearing his carriage approach. I hear it every year..."

That sent a chill down my spine. She was aware of her situation! And she willingly played it out in some vain hope that eventually she'd get the jewels and leave before being discovered by the servant. Which in turn would mean she could avoid taking the wrong turn and falling over the balcony and into the Great Hall.

"Do you know what it's like to be in love with someone, only to be told you have to wait over and over again?" she continued, still with that twisted, dreamy expression on her face.

I hesitated as my treacherous brain began thinking about Nathan. I had been in love with him practically my whole life. I'd even done as he'd asked and tried going out with other people, seeing if there was someone other than him that I might fall in love with. But, no matter how good things were between me and the person, I never felt for them the way I did for him.

"Ah, I see you have," Madeleine continued, the smile fading from her lips. Now, she began speaking to me sympathetically. "Then you know the pain I've been going through and how the wait can make you desperate. Desperate enough to risk everything for that chance of true happiness."

I nodded. "Yes, I do. And it hurts so bad sometimes you want to lash out at the world."

"Or at the ones who block your way, or..." here she paused and stared past me at her brother, "... refuse to be sympathetic to your plight, no matter how many times they tell you they love you."

I could feel her anger rising again and a part of me wanted to agree with her and step aside. But another part, that big sister who'd fight hell itself to protect my little brother, wasn't about to let that happen. I wasn't sure what I should say next, but then I spotted a movement behind Madeleine.

It was a greenish mist, carrying small bundle, making it's way to a large bookcase just over her left shoulder.

Posted by Allan Krummenacker at 10:58 AM No comments: