Author's Note: today I'm introducing you all to Marisa.  She will be one of the lead characters in the actual novel and will be playing a vital role in the story.  Here we see her very first blog entry, when she is only ten years old and very happy.

Hi Everyone and welcome to my blog.

I'm Marisa and I'm a huge fan of ghosts, scary movies, and vampires. Especially vampires, I love watching movies about them.  Probably because of my dad.  He has got like every vampire movie made it but he hardly ever gets to watch them because Mom's not into them and he hates watching them alone.

So about a year ago, I got the book "Dracula" for Christmas and now he and I watch the movies together every Sunday.  We just watched Christopher Lee in "Dracula Has Risen From the Grave". He has got to be like my favorite Dracula, even though in real life he's like ancient these days.  Though I did see him in Star Wars "Attack of the Clones" and frankly, he was the best thing in that movie personally speaking.  Even being so much older now, he still has an air of power and charisma.  I kind of hope he stays around for a while, he seems pretty cool. 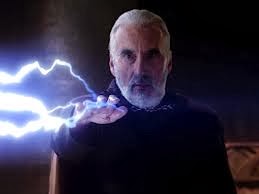 Though, I really can't say the movie was all that bad.  I loved all the robots and battles, those were pretty cool.  I wasn't too keen on Anakin because he seemed kind of whiny sometimes, but I could certainly understand his killing all those Sand People after what they did to his mom.  If anyone hurt either of my parent's I'd be going all Terminator on their asses.

Um... did I mention I also love Sci-Fi movies with robots and cyborgs?  I get that from my dad too.

Mom likes to think he was hoping for a boy to share all these things with since she's not into that stuff.  I don't know if that's true or not, but I don't care.  The guys at school like the fact that I'm into that kind of stuff.

That's all for now, my Mom's telling me to get  ready for my first Girl Scout meeting.  Up until a few months ago, I was still in Brownies.  Now I'm old enough to join the big girls.  See you all later.

Posted by Allan Krummenacker at 4:50 PM