That's right, you saw it here.  My Dad is an honest to God hero.

Now for those of you who've never met him, let me tell a bit about Dad.  He's not a firefighter.  He's not a marine, a cop, or in the military.  He's a mailman.  An average guy who walks the same route day after day, delivering mail.  In rain, sleet, snow, or the heat of the summer, he's out there doing his thing. 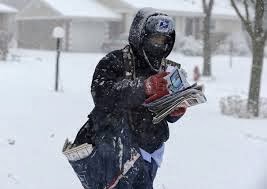 He's walked the same route for like ten years now, and he knows every one of his customers and they know him.  Heck, even their dogs know him and they don't chase him either.  They all like him, with the exception of Dukey.

Dukey's a pain in the ass. I'll talk about him another time, right now I want to tell you how Dad saved a woman's life today.

One of the people on his route is an old woman named Ms. Katz.  She's a widow who recently had to put down her dog.  Dad was really upset about that one.  Brandy was an Alaskan Malamute who was a really sweetheart.  He'd bore us with stories about her sometimes, but she was a great dog.  Unfortunately, age caught up with her and she had to be put to sleep.

Ms. Katz wasn't ready to get another dog just yet, so she was all alone in the house when the accident happened.  Dad noticed he hadn't seen Ms. Katz for a couple of days and that her mail wasn't being taken in.  He knew she lived alone and that she always alerted him if she was going to be away even for just a day.  So he knew something was up.

He went up to her front door which has an old mail slot.  Dad never uses it anymore, because of her age.  It's too hard for her to bend over all the time to pick the mail up off the floor.  He convinced her to have a regular mailbox put up near the front door.

As soon as he called out, he heard sobbing coming from the back room.  He raced around the house, looking through the windows until he saw her. Ms. Katz was lying on the floor, pinned by her bureau which had fallen over.  Dad immediately rushed to the back door, which was unlocked and got to her in record time.  He pulled the bureau off her and called 911.

Luckily Ms. Katz was just weak and dehydrated.  Nothing broken, but if Dad hadn't found her when he did, God knows how much longer she would've been trapped.  The newspapers are doing a write up about him and everything.  Even a television reporter interviewed him at work this afternoon.  How cool is that?

Apparently, this isn't the first time he's done something like this.  A few years ago, he spotted a guy breaking into the house of one of his other customers just a couple of blocks from Ms. Katz's place.  I guess I must've been too young to pay attention.  He had a neighbor call the cops, while he caught the guy on his way out and sat on him.

I may have to start paying more attention to him when he's telling me and mom about his day.  Being a mailman may not be glamorous, but it's not boring either.  I'm really proud of him.  He's always been my hero, and now everyone knows why.

PS:  Almost forgot, guess who made it onto the cheerleading squad this year?  That's right, me!  I can hardly wait, I've been working on routines all summer long.  Now it's finally paying off.  Tell you more next time.  Today is my Dad's day!  Woo-hoo! 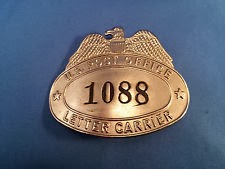 Posted by Allan Krummenacker at 4:33 PM