As I sit here typing my mind is still in a whirl.  The idea that something I've written is actually getting published seems unreal.  Then again a lot of things I've done in my long life feel that way. 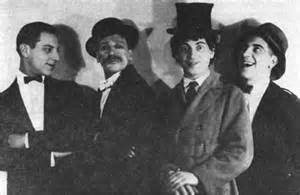 The first time I stepped out onto a stage in vaudeville to play a part in one of the Marx Brothers routines I felt the same way.  I'd been helping out in their rehearsals and knew the routine by heart, so when Gummo wasn't able to appear with his brothers one night, I was drafted then and there.  I'm proud to say that I did not suffer stage fright, but that was mostly because I had Julius, Arthur and Leonard with me.  I knew they had my back and I wasn't about to let them down.  In a way, it was like being back in the Union Army, where I knew I had a bunch of guys watching out for me just as much as I was keeping an eye out for them.  When we finished our routine they made sure I took a bow with them.  After that I started finding myself on stage a number of times with some of the other acts who knew me pretty well.

But I digress.  As my second semester taking writing classes was drawing to a close, one of my instructors urged me to try and submit a few of my short stories to a few magazines for publication.  This was in March and I trusted my instructor's judgement and with their help I prepared a cover letter, synopsis and a sample of one of my stories.  Needless to say the results were pretty much what I half expected...

Not to say I wasn't a little hurt, but my instructor was like, "Good, now you're really on your way to being an author."  Needless to say I gave her a very curious look, but nodded and kept trying.  Withing weeks the responses, or rather more rejections, came rolling in... 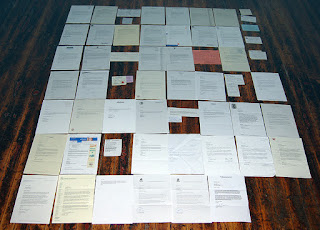 Yet in spite of this, Brian, his family, fellow students, and even other members of the English and Literature faculty kept urging me on.  So I kept at it.  Finally, yesterday, I got a response from of all magazines Playboy, who wanted to publish one of my stories. It was one I submitted on a whim to their college fiction contest last year.  I didn't win mind you, but one of the editors kept it on file because he thought it was really good.

In any case, somehow they were looking to fill space and he remembered my story and contacted me saying they wanted to run it.  Naturally I said yes so next month, my first published short story will be coming out in Playboy Magazine.  I'm hoping the readers like it, or at least those who read Playboy for the articles, all of two of them.

Still, to have my first published story appear in a magazine of that caliber is an honor.  I'm hoping it will help springboard me into other publications or at least get my name out there.  Or rather my pseudonym Daniel Bachmann.  Bachmann was my mother's maiden name and Daniel was my grandfather's name.   Too many people out there know or heard of Nathaniel Steward over the last few decades who don't know my secret.  So a fake name just seemed more appropriate on this occasion.

So my first published work will be sandwiched somewhere in between naked women and... now I'm jealous.  Time to head out and enjoy some nightlife.  I hear there's plenty of great places here in London, and the lights at night are beautiful.  Who knows, I might get an idea for a few more stories.  Yup... I'm a writer all right.  Always thinking about the next tale. 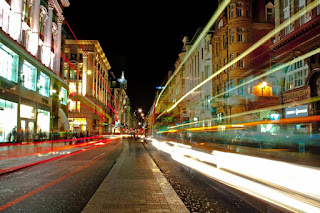 Posted by Allan Krummenacker at 9:26 AM