Ah, how I love the crisp night air on nights like this.  I think Fall and Winter have always been my two of my favorite seasons.  Long before my change I used to love these times of year.  Something about the cooler weather just made things easier on my achy body.  Of course back then no one had heard of Fibromyalgia, you were just considered "too delicate" or "a malingerer".   But in those seasons, I just always felt more alert, more alive and still do.  Although now it may be partly the fact that since my body prefers evenings, the shorter hours of daylight probably plays a big part in things.
In any case the cool air and the signs of autumn are helping lift my spirits tremendously. 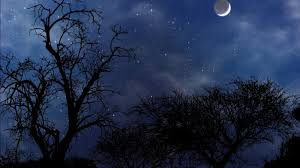 The barren branches of the trees seem to reach out as if to touch the starlit night sky.  There are a few clouds but not enough to mar the view of the moon or the stars.  Halloween is not far away, I hope the evening is like this so everyone can enjoy themselves trick or treating, or going to parties.  Perhaps I should open the manor to visitors?  Nah, too soon.  Although Richard's done wonders with the place, but it's not ready for visitors.  Or maybe it's just me which is probably the case, since I'm using all this mental wandering to avoid the problem of Marisa hanging around the old locomotive, which happens to be exactly where I'm headed right now.
How long has the old thing been there?  Even I'm not really sure.  We were a rail town long before the war started back in 1861 and trains were coming and going on such a regular basis, who'd have noticed if one engine never seemed to be moved?  I'll have to ask Louisa the next time I see them. 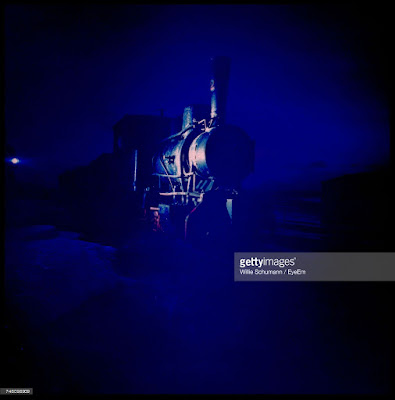 I can see her outline in the darkness up ahead.  One side of her is lit up from the distant glow of a streetlamp.  She's always been impressive looking, in spite of all the rust and weathering from all the years of exposure to the elements.  She's a fixture from another time and will in all likelihood continue to stand there for many decades to come.  Especially since there is no way to move her.  She's anchored to that spot, just as I hinted to Marisa last night.
That probably wasn't one of my better moves, but she was so upset at the idea of the thing being haunted I had to come up with something more pleasant and intriguing.  Alas, that is part of my curse for having become a writer.  My mouth works faster than  my common sense some days.  Of course there are those who question whether I have any common sense at all, like Louisa.
Oh the haranguing she'll give me if the carnival shows up and finds Marisa hanging around one of their 'anchors' to this world.  That woman can have the sharpest tongue on her at times.  Hell, she could put a ginsu knife to shame when she wants to.  Not that I can blame her.  Like me she's very protective of those in her carnival, and with good reason.  If anyone ever knew the true nature of any of the members of Karneval Schatten, or where they came from...
Wow, I'm actually shuddering at the thought.   But who could blame me?  Our first adventure together was a terrifying one.  If it hadn't been for Brandon Elliott and his great-grandson Peter, I don't know if even I could've survived the fire that night.  Thanks to them, we all got out in one piece... well almost all of us.  Brandon stayed behind to keep that white-haired creep at bay, while Peter and I got the trapped employees, along with Louisa and her troupe, to safety. 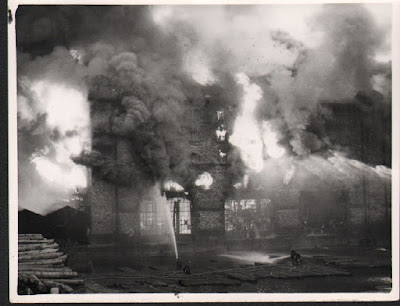 I tried to go back for Brandon but it was already too late.  The building had begun caving in on itself and the heat had become too intense even for me to mist through.  I felt like a failure that day, until I noticed young Peter, who was standing no more than a dozen feet away, talking to a man that everyone else seemed blissfully unaware of.  It took me a moment to recognize the figure as that of the man who had saved us all, only he was looking much younger.  I thought about going over to them, but just then the figure faded and Peter came over to me saying, "We have to get the others out of here.  There's a train about a half a mile from here we can get them them on.  But it has to be soon, otherwise the opening will close and they'll be caught again."
I started to ask why, only Louisa's mother (also her namesake) joined us.  Having seen my abilities in action earlier, she begged me to help get those in her care back to their train.  Most were still exhausted from their imprisonment inside the depths of the factory, while others had been injured in our escape.  Having learned that many of them were, like my Sangui-Sapio half, were not from this Earth, I agreed.  Getting them to the safety of their conveyance had not been easy, but between my mist form and mind control we managed and saw them off.  That was the second time I'd seen a portal to a Para-Earth open, but the first time I saw one close.  However, it wasn't the last.
They'd asked me to come with them before they left, but I'd declined.  I'd only recently lost Madeleine my first wife, and our son Brian (who Lisa's father is named after) was still in mourning and needed me.  So I remained behind, that time anyway.  But our paths crossed again and again, and always they'd bring me back here to this spot because it's one of their an "anchor points".  At least that's what Otto and Louisa told me once, long ago.  In spite of all my travels with both Otto and my carnival friends, there's still so much to learn about Para-Earths.  Lisa seems fascinated and would like to go with us on one of our jaunts, and one day I might take her.  But first I'll introduce her to Louisa and company the next time they come calling.
Whenever that will be.  I never know.  Sometimes they'll come to town and stay a few days, while other times they'll just show up in the middle of the night looking for me because my talents are needed.  They always seem to know where to find me, not that I mind.  I have many friends aboard that train.  I'm just not sure about Marisa encountering them unexpectedly.
The Crypt will be open tomorrow night and I know the girls will be showing up, so I'll talk to them then.  If worse comes to worse and Marisa insists on visiting the engine, I'll make sure I'm on hand just in case the carnival suddenly decides to come to town at the wrong moment.

*And so ends this untold tale.  We hope you enjoyed this latest installment and that it piques your interest to learn more about the strange traveling carnival who will make their first full appearance in our upcoming anthology "The Vampyre Blogs - One Day At A Time".

And For those who have read the "The Vampyre Blogs - Coming Home" this entry takes place the night before Marisa and Lisa are taken up to Nathan's art studio, after Marisa's little fight with another girl.  It in the studio that Marisa's first suspicions about Nathan's true nature form because of a dropped compact.

Posted by Allan Krummenacker at 11:05 AM