I/we made our way over to the plastic covered figure and carefully unwrapped it. Somewhere behind us Brian took in a deep breath, followed by the words, "Oh my God... it's... it's going to be one of your best pieces."

I felt/heard Nathan share the same sentiments inside our shared head. "Agreed." 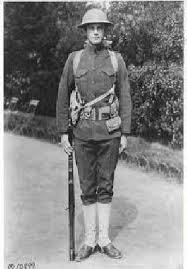 "But there's still so much to do," I told them both, glancing over at the wall next to the sculpture. There was a bulletin board with several photos of my grandfather, at least one of them in uniform. The rest were a couple of him even younger, as well as several of him later in life. I had gathered them to try and help me capture the spark of determination in his eye, the set of his jaw, as well as the... the spirit of the man who would come out of not just one but two great wars. I wanted to capture the man he was and would become all in one shot.

But now I hesitated and looked down at my/our hands. I knew they could work the clay, but would they have 'my' touch?

"Of course they will," Nathan assured me. "This is where I take a backseat. You're in charge. Just think of your grandfather and go for it."

As soon as I heard those words in my head, I saw my grandfather in my mind as clear as day. Clearer than I'd ever been able to remember him. Honestly, I could see every detail in his face that I wanted to capture and just knew what needed to be done.

What happened over the next twelve hours will remain with me forever. Never had the clay felt so soothing and yielding to my touch. It and I were in harmony like never before. Had Brian not fallen asleep, letting out the occasional snore, I would never have realized how much time was passing. Nathan and I only paused briefly to allow him to take over and drink what our body needed, before going back to work.

Every now and again, I'd start to wonder if he wasn't helping guide my hands, but I knew better. I could sense his wonder at what his hands were helping create under my direction.  Finally, we took step back and into Brian who had been fast asleep on the couch nearby. I'd it in the studio from day one, knowing there'd be times when I would need to stay overnight from time to time. I admit it, when I get going I don't like to let up some days.

"You're telling me," Nathan murmured out of our shared mouth. I could actually feel his sense of awe which only added to my delight in this moment. I'd succeeded! But there was still more work to be done.

Walking over to the shelves I pulled out a long thin wire with wooden handles tied to each end. Then I headed back over to the piece and started stretching the wire from the head of the piece down to its base.

"Um... what are we doing?" Nathan asked aloud. I realized this was for Brian's sake, as he was looking as puzzled as Nathan was feeling.

"This," I replied and pulled on the handles of the wire, which slowly sank into the clay, neatly severing the sculpture into two sections. 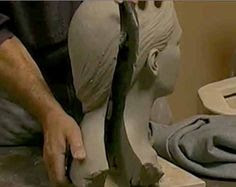 "OH MY GOD! WHAT HAVE YOU DONE?" Nathan cried, making us take a step back. But I quickly took over and brought us back just in time to catch the back half of the piece before it fell onto the table.

Before I could explain, Brian cut in saying, "Oh... that's so you can remove the armature inside the statue."

Inside our head, I heard Nathan spluttering, "The who... what... where? Wait, this was supposed to happen?"

Patiently, I explained, "You don't get two feet of clay to stay upright all on it's own. Take a closer look. See, there's metal rod attached to the base that runs inside the entire sculpt."

"Well, that has to come out before I put the piece in the kiln for one thing. For another, I have to start hollowing out the entire piece."

"Hollowing it out?" Nathan repeated, this time aloud for Brian's benefit.

"That's right, like this," I gently held the one half that had come off the main piece into one hand, while I grabbed a tool from nearby in the other. From there I proceeded to scrape out some of the interior of the piece I was holding. 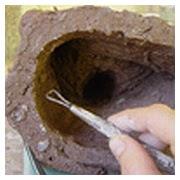 Remembering to speak out loud, I continued, "Now, I'm going to remove just enough clay so that the remaining shell is just under an inch thick all around. Then I'm going to do the same to the other half that's still on the armature. This it to keep it from cracking when it goes into the kiln. I'm also going to poke a bunch of 1/2 in deep holes to also prevent cracking."
Naturally, I did as I promised, allowing both Nathan and Brian to see what I meant. Then I did the same to the other half. When both were nicely hollowed out and pricked, I began scouring the edges of both halves where the wire had cut them, and then brushed the edges with a water. "Since this is a water-based clay, this will allow me to put them back together," I explained.
"But what about the seams where the two halves meet?" came Nathan's voice out of our mouth.
"I was wondering the same thing," added Brian, who had been watching the entire process intently.
"I'll add more clay and smooth it all out, and then rework it into the rest of the design," I told them.
An hour later, the piece was whole again, without the slightest hint that it had been cleaved in two.
"So now you put it in the kiln?" Nathan asked out loud.
"Yes, but we're going to use a low heat to dry it out. The process is called 'candling'. Then once the clay is really good and dry, we'll start the firing schedule," I replied.
"The what?" Nathan asked out loud again.
I winced inwardly. Obviously, neither of them had any clue how long this was going to take. Plus, I was starting to get worried about my physical form back at the hospital. The three of us really needed to talk things out before anything else could happen.
TO BE CONTINUED...
Posted by Allan Krummenacker at 2:36 PM