Nathan wasn't kidding about this being an old-fashion Christmas. Green garland was hanging from the staircases, the walls, you name it. And the table in the dining room looked like a Hollywood set. There was plum pudding, oysters, pies, potatoes, fruits stacked up like pyramids, sweetbreads, the list goes on and on. We even had chestnuts roasting in the fireplace.

It's become one of my favorite places to sit near. It's huge affair, with ornately decorated tiles in the firebox area, as well as a beautifully carved stone mantel with intricate pillars leading up to it. There are a couple of wingback chairs set in front of all this, and that's where I could be found whenever I'd come in from outside. Sometimes Nathan sits with me, not that I've seen all that much of him since our arrival. He seems to come and go on 'business', supposedly it has to do with a book or two he's researching, but I've seen him talking with his Lordship from the windows now and then. I don't have the nerve to ask our host what they're talking about, and I haven't been able to get Nathan alone long enough to get the story out of him. 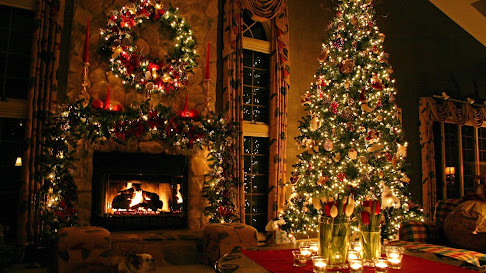 Anyway, getting back to the holiday decorations, we finally come to the tree itself. It is huge, and because Nathan is around, the tree stands in a huge pot of soil. Like everything else in this great place, it too has decked out in classic Victorian style, with ribbons, flowers, small toys, sweets, fruits, crackers (Christmas ones, not the kind you eat), and ornaments made of paper and glass some of which are at least 100 years old.

Tonight, being Christmas Eve, the Lord and Lady of the manor hosted a huge gathering of family and a few friends (namely us). And in keeping with the old-fashion theme, everyone was dressed in clothing from the before 1900. Naturally, me being into Goth clothing, I should have fit in easily. But most of my outfits were too bright and modern. Luckily, her Ladyship led me to the uppermost level of the mansion where they had a host of outfits for me and my family. I settled on a green velvet with white trim and hints of deep red. My parents and our hosts were delighted at my choice and I couldn't get over how well it fit me. 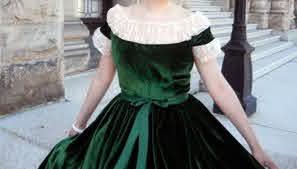 Mom and Dad looked smashing in Edwardian garb and my little brother Geoffrey looked adorable  in his "Little Lord Fauntleroy" outfit. Even if he didn't think it was all that great. Of Nathan there was no sign, although he had promised to be around. I asked Dad what was going on and he assured me Nathan was on important business, but would definitely be showing up before the evening was out. Before I could ask him any more, he announced it was time for us all to join the festivities downstairs.

Let me tell you, I had no idea what a crowd awaited us down there. His Lordship insisted he had only invited family, but he neglected to mention there would be several generations. His five siblings had brought their spouses and they in turn had brought their children (numbering anywhere from 4-6) per household. And their ages ranged from younger than Geoffrey to those my age and a little older. So I didn't wind up being the oldest when it came to playing some games I'd never heard of before. Oh I was familiar with Charades, and Blind Man's Buff (or Blind Man's Bluff as it's sometimes called). But there were more games I'd never heard of before that go all the way back to the 1800's. Up Jenkins, Find the Thimble (for the younger ones), Snapdragon (which involves flaming brandy and raisins in a shallow bowl). 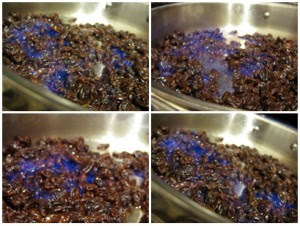 Shadow Buff was completely new to me, but Isabella proved quite good at it and I soon caught on and found it to be quite a bit of fun However, when it came to playing "Sardines" that's when the night took a spooky turn for me.

Now for those of you not familiar with Sardines, it's like a reverse hide and seek game. Instead of everyone hiding while one person counts, only a single person goes into hiding and the rest of the people count. When they are done counting, they all spread out and try to find the person who hid. However, if they find that person, instead of calling out to everyone, the seeker joins the hidden person in their hiding spot. This continues until all the seekers have found the location and have the person who hid in that spot, until they're all packed in like... you guessed it... sardines.

Being a newcomer to the festivities, I got to be the first person who had to hide. I was told I could go anywhere inside the mansion, which gave me a lot of possibilities. And me being me, I immediately gravitated upstairs to where I'd found my lovely dress for the evening. 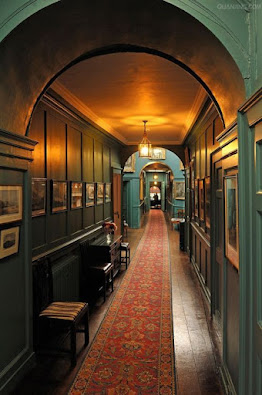 Soon I found myself on the top floor looking down a long corridor of doors. Most of these had been living quarters for servants, but according to our hosts no one had used them for years. Which was why several of them were now being used as storage space, including the room where I had found my dress. When I was in there earlier, I'd spotted a door peeking out from behind some tall boxes. No doubt it was a closet and would make for an excellent hiding spot. While allowing room for the others to join in when they found me, without making any of us feel too claustrophobic. Or so I hoped.

So you can imagine my surprise at finding, not a closet, but a very large room with a roaring fire in a good-sized fireplace crackling away behind a screen. Glancing around the room I saw there were a couple of desks off in the corner, while the rest of the room had shelves for books and a number of children's toys. Most of those seemed to be antiques, but in good condition overall. There was a rocking horse that had clearly seen a lot of use, but also a lot of love as well. I could easily picture a child hugging that wooden neck with the real horsehair mane.

Then it hit me. Of course, a governess would have a room connected with one like this. No doubt the room I'd found my dress had been her bedroom, and this was the schoolroom where she would teach and play with the children in her care. But who was using it these days? And why was there a fire in the fireplace?

My curiosity was in overdrive at this point, so I began to explore every inch of my surroundings. There was an old sofa, whose back was facing me, near the fireplace. As I drew nearer I heard a small cough coming from the other side of it. Immediately, my sisterly instincts kicked in and I went over to have a look. I found a small boy, curled up on the sofa with an old blanket covering most of him. Had I not spotted his eyes peeking out, I would've totally missed him.

Posted by Allan Krummenacker at 6:53 AM No comments: