Message From The Author....

I want to apologize for the lack of updates lately.  I'm attending university and have a major exam coming up this Thursday and am studying like crazy.  Let me tell you, Pre-Calculus and I just do not see eye-to-eye very easily.  Luckily, my wife, the graduate with the B. S. in Mathematics, is helping tutor me, so hopefully I'll do all right.
But rest assured, once the exam is over on Thursday, I'll be working on continuing the current story about the "Theater" which has several poignant memories for our favorite vampyre, Nathan
Also I wanted to let you all know that "The Vampyre Blogs - Coming Home" is on schedule to be released this December, as planned.  The book will be available in paperback, and the following e-book formats: Kindle, Nook, Apple, Sony, etc.  I decided against going exclusively with Kindle for this book, after a number of readers asked if it would be available for Apple and Nook.
Currently the 2nd draft is fully under way, and I'll be sending it out to beta-readers soon, so stay tuned.
That's all for now.  I thank you for your patience and continued support.  I'm really looking forward to unleashing Nathan and company on you all come December, where all the characters who've been leaving entries on this blog will come together in one epic story. 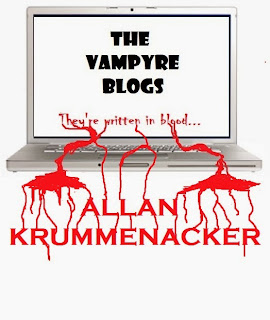 Note: Image above is NOT necessarily the finalized cover.
Posted by Allan Krummenacker at 2:22 PM No comments: 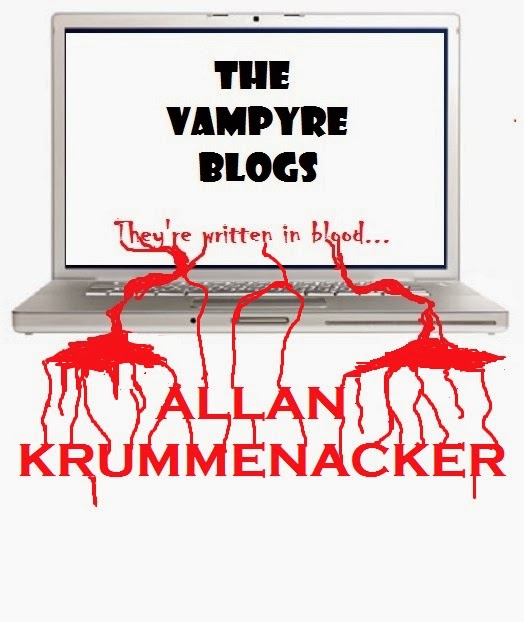 Hello everyone, I've given Nathaniel and company a break this week because of the holiday.  They'll be back shortly with more blog entries.  But in the meantime I thought you would all like to know how things are progressing on the actual novel.

I'm sure you'll all be happy to know that I completed the 2nd draft yesterday, which gave me something extra to be thankful for on Thanksgiving.  Writing in the first person has been quite the adventure for me.  Most authors stick inside one character's head and they act as the narrator for the entire story.  But I prefer sharing various character's points of view, so I normally used limited third person, where I give each character a chapter where we see inside only their heads for that chapter.

Doing blog, journal, and diary entries to tell the story, has allowed me to do something similar with this novel.  However, I've had to create unique 'voices' for each character as well.  I didn't want a blog entry by one of my teenage characters to sound the same as one of my middle-aged male characters.

I've also had a bit of a challenge dealing with past tense vs. present tense.  After all, if you're writing about something that happened to you in your blog/journal you use past tense.  So I've had a little bit of a challenge making the events sound just as exciting as if I were using the present tense like I have in my other novels.  Plus I'm trying to make sure I 'show' people what happened and not just have the character 'tell' you what happened.  I like to give enough details that my readers can picture the scene and all the action inside their heads like it was a movie.  So I'm going to be paying close attention to what my beta-readers say when they get to look at the book.

Now, that I've completed the 2nd draft, the book is getting looked over and the first edits will be under way.  I won't be doing much new writing for a few weeks because I'm attending university and it's getting towards the end of the semester.  This means the professors are loading us up with last minute assignments, as well as getting us prepped for final exams.

I will be putting out a short story involving Nathaniel and several characters from my previous novels, creating my first cross-over story.  Being a short story it won't take me long to put it together.  It will be a holiday piece which I plan on releasing on Christmas Day.  So stay tuned for more detials on that.

In the meantime, Nathaniel, Lisa, and Marisa, as well as a few others will be posting here again very shortly.  So you won't be without anything new to read here.

With that said, thanks for all your support and feedback.  I'm glad so many of you are enjoying my vampyre's experiences along with those who are a large part of his extended life.  For those who celebrate Thanksgiving I hope you had a wonderful holiday.  I'm looking forward to this weekend to start decorating as well as study and do homework.

Until next time be happy and healthy.

Posted by Allan Krummenacker at 7:08 PM No comments: