Just 3 more days until you can get your own copy of the latest installment of our
Para-Earth Series... 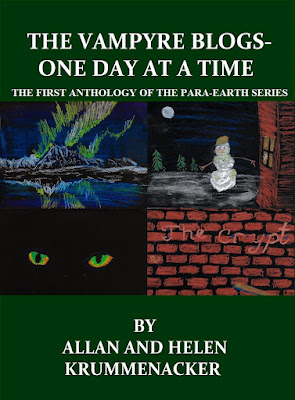 The stories contained within these pages will make you laugh, gasp, giggle and possibly shed a tear or two.  But most of all they will leave you anxiously waiting for more stories which we promise are on the way.

Remember you can pre-order your Kindle copy for just $3.99 at the following link:

In the meantime here's one final peek into the first of what we hope will be many paranormal/science fiction anthologies...

For someone who travels so much, I always seem to have trouble getting ready for departure. It’s helpful these days, having my granddaughter on hand to look after the farm, my pets, and the complex organizing of my correspondence. She came to Germany to get a medical degree and is happy to stay with me and help out. There is little enough work-- while we do still produce some crops to send to the local markets, apple and walnut trees require little attention most of the year, and there are people we can hire for that. Mostly, she spends several hours in town working on studies and research, and enjoys the property as a chance to get away.
Still, there are always many details for me to take care of. For instance, my pets take extra attention. They are not the kind of thing you can easily take to the vet. No one has seen a living trilobite, except for in my aquarium, and many of the others have no near relatives that have existed on this Earth. Depending on one’s definition of near. Fluffy, for instance, has many birdlike traits. His usual prey is squirrel, but herons and hawks like them, too, and he largely eats nuts, especially acorns, to get his protein. He also keeps snails and caterpillars from messing up the family garden and rats out of the buildings. Birdlike was a good description for him. One difference in events between two parallel Earths could lead to such wonderful paths in evolution.
The indoor animals were all doing well and the controls for their temperature, humidity, and other such comforts were working fine. Fluffy had noticed me packing and was shadowing me now, wanting plenty of attention before I went away. We played a bit of fetch as I worked and he ran in circles around me out to the barn.
“Wolfgang!” I called out. The pygmy woodland camel was not inside, even though it looked to be a wet day. I assumed he’d decided to forage in the orchard, so I went out that way. Ruefully, I discovered a fence post had been knocked over and had on it some of the brown wool Wolfgang grew.
I quickly ordered Fluffy back. I didn’t need him to get out, too, and start harassing the neighbor’s cat. As bright as a peacock, as large as a turkey, and not exactly a bird, he would be difficult to explain to anyone who got a good look at him.
For that matter, Wolfgang was not easy to explain, but might pass for a rare breed. The question was, where would he be? Following his tracks would help, but only in the softest areas. His feet were wide and kept him from sinking easily. While he was naturally a creature of the forest, he had been raised by me from when he was only about two months old, and I did not believe he would wander far on purpose. However, herd animals seek their kind and, failing that, will seek a good facsimile. Fluffy, for instance, usually spent most of his time among the crows, who were happy to hang around the liminal area between forest and farm to keep their distant, brilliant cousin company.
As for Wolfgang, his closest relatives would be camels or llamas, and neither one was likely to be abundant in the area. On the other hand, llamas did sometimes show up for one reason only. They were terrifically fond of sheep, and guarded them against predators better than a dog.
He wouldn’t, would he? Of course he would. One thing you could trust any pet to do, no matter what their species, was to gravitate to exactly the activity that would be sure to cause chaos. At least it was autumn, and no chance of a shearing taking place. With a sigh, I headed out to Snyder’s, the nearest farm with sheep.

Posted by Allan Krummenacker at 8:05 PM No comments: