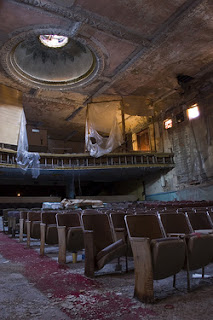 I stared sadly at the rows of dilapidated chairs and torn hangings.  Plaster had fallen from the once ornate ceiling, as well as the walls.   There was dust everywhere and a feeling emptiness that seemed to reach inside me.

"I've heard people say they can still hear the laughter and applause when they come here," Mae told me in a wistful voice.

"I'm not one of them," I replied with a candor and bluntness that took me by surprise.  "This place is as empty as a tomb... and yet not quite."

Out of the corner of my eye I saw Mae smile.  "You didn't use to be so direct," she remarked.

"Only with you," I reply and turned to face her.  "And do you know why?  Because you told me that the was the way you preferred me to be.  Direct and honest."

Her smile widened and for a moment I could see the girl I met in this very place all those years ago.

Taking my hand she led me out of the balcony area and back towards the stairs.  As we walk, I notice the top of one of the pillars.  Being so high up, it seems to have avoided accumulating too much dust and can see the gold painted scroll work.  It glistens in the what little light there is coming through the down the stairs.

The sight makes me smile.  To see hints of the old grandeur of the place still in tact, in spite of all the decay that surrounds us, brings a warmth to my heart.  It also raises suspicion that has been growing in the back of my mind since I got Mae's phone call. 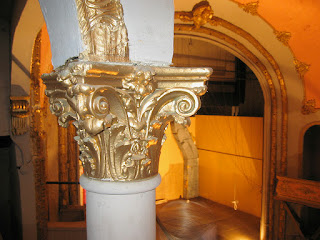 But I say nothing.  I just wish to enjoy being with her again.  As we both said, it had long time since we'd last spent time together.  We make our way down the stairs carefully.  A fall wouldn't do me much harm, but Mae would be another matter.  Besides, it gave me an excuse to keep her close.  Even after all this time, the smell of her was intoxicating to me.  There were so many things I wanted to say and do right then, but I kept myself in check.  She had brought me here for a reason and I was curious to learn what it was.

Once we reached the bottom of the steps she led me down a corridor that was as familiar to me as my own name.  I'd carried her down this way one night after she'd slipped and twisted her ankle just outside the theater.  It had been snowing and the sidewalks had been slippery.  She was trying to get back on her feet when I arrived on the scene and scooped her up as if she weighed nothing.  The gesture had impressed her.  Until then she thought of me as a real sweet guy who could use a little beefing up.    She started looking at me in a different light after that. 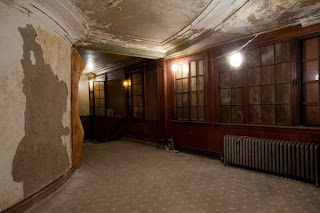 And now, over sixty years later, we were passing this way again.  Surprisingly, the corridor was in better shape than I expected.  There were sections of wallpaper missing and the ceiling needed some work, but there was an elegance that was still visible.  As we explored, we talked about our days here and of old friends.  Some of them were still among the living, while others had left this world.  Yet, all of the ones who had been here, had left something of themselves.

I know this sounds contrary to what I said earlier about the place being empty, but there was something in the air.

Now we had reached the stage and were carefully making our way among the fallen curtains and forgotten ropes an pulleys, which I had worked so many times in my first few years at this theater.  I still remembered how to operate each and every one of them, and what they did.  I also knew how to fix them and could get them up and working again within a short time. 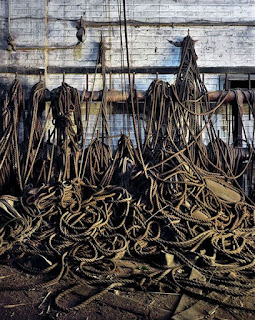 At that point the suspicion that had been in the back of my mind grew, but I said nothing as we continued our exploration.  Soon we found ourselves in the area of the dressing rooms.  Vandals had left their marks on the doors, but had done little else. 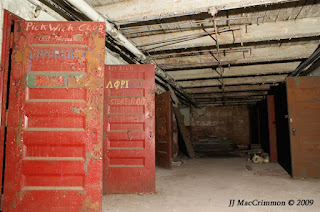 Another wave of nostalgia swept over me as we peaked into each room.  One of them left the two of us breathless.  It had been converted to be a prop room and there were still some items inside.  Of course time and neglect, along with some hooliganism, had left their marks here.  But what really moved me was the fact that one or two pieces of furniture I recognized.  "That table and wardrobe, they..." I began, only to have Mae cut in.

"There were in my dressing room," she breathed in awe.  "I can't believe they're still here."

"Would you like to take them home?" I asked, even though I already knew her response. 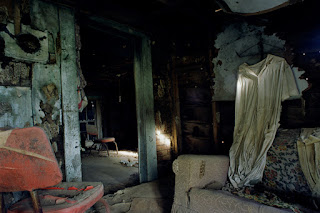 "No, they belong here.  Or rather in my old dressing room," she said with her usual confidence.  But then she sighed and added more quietly, "Not that anyone will ever see them."

"Not unless we buy the place and restore it to its former glory," I replied.  "That is why you asked me to come here, isn't it?"

Mae didn't answer right away.  She merely smiled and slipped her arms around my neck and whispered, "The thought had occurred to me.  But there was another reason why I asked you to come."  Then she kissed me, good and hard.

TO BE CONCLUDED NEXT TIME...

Posted by Allan Krummenacker at 8:55 PM