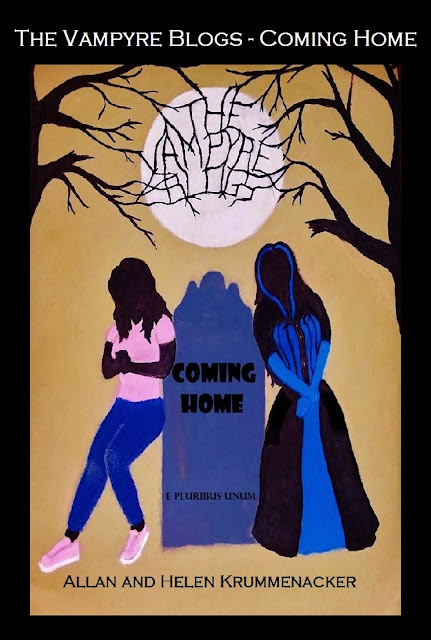 Technically  a re-release, but "The Vampyre Blogs - Coming Home" is returning to online bookstores everywhere with a whole new look. As mentioned in previous posts, many told me that the book was more suited to Young Adult audiences since both 17 y. o. Lisa and Marisa do the majority of the storytelling. Furthermore, we didn't want to lose all the reviews the book had already garnered previously.

So we gave the book an overhaul with a brand new cover and synopsis. You've seen the cover above, now for the synopsis...

Ever since her father was diagnosed with cancer three years ago, Marisa has had nightmares about the disease taking the form of a vampire, slowly killing him. She can no longer stand movies or books involving even ‘good guy’ vampires, much less any of the old horror movies she used to watch with him. She even stopped hanging out with her best friend Lisa who got into Goth clothing and make-up, even though Lisa has been trying to be there for her this whole time.

But all that is about to change with the arrival of young and handsome Nathan, a family friend Lisa grew up calling Uncle. Not only does his arrival set both girl’s hearts beating, but it gives them a chance to renew the friendship both have sorely missed.

However, there’s more to Nathan than Marisa realizes. Lisa knows he is a vampyre-like being. He may also be the one thing both the girls and the town needs most. For a true horror from the Para-Earth here Nathan was altered has entered this reality. And he is the only one who can stop it.

A ripping 4 and 5-star vampire story just in time for the creepy holiday season. It's partner "The Vampyre Blogs - One Day At a Time" will also become part of our YA line of books.

Now some might be wondering if this means none of these characters will be appearing in future books that are not YA. The answer is of course they'll be showing up. Nathan is already scheduled to make an appearance in the "The Door" which is sequel to "The Bridge" and "The Ship". He will be accompanied by Lisa and Marisa in "The Door" and possibly in the big cross-over "Harlequin House" which will pit all these characters against some consider the most haunted house on the planet.

But never fear, Nathan and the young ladies have other adventures looming of their own such as "The Vampyre Blogs - Family Ties" which will pit them all against a ruthless developer who knows Nathan's secret and how to deal with him. Family bonds, betrayal, faithful friends, and extended family will be tested as Nathan and company fight to not only save his family homestead, but Marisa's father, as well as their town, their state. and possibly the world.

Also, audiobook versions of Nathan and company's adventures are under way as you read these words.

In short, we got a lot happening on this and other fronts so please help spread the word, and also stay tuned as new stories are coming your way on this blog.

We thank you all for your patience and support. Links to all the new online stores will be posted soon as these books will now be available not only through Amazon but Barnes and Noble, Kobo, Smashwords and other online outlets.

So until next time, take care and happy reading everyone!
Posted by Allan Krummenacker at 9:12 AM