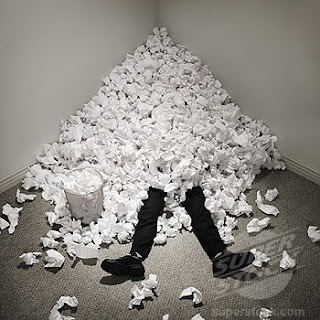 I couldn't make out the man's face, or his upper torso, because he was literally buried under a huge pile of crumpled papers.  I didn't know whether to laugh or scream.  It looked so comical, but there was also the very real possibility that this man was injured or worse.

But then I heard the faint sound of snoring, coming from deep inside the mountain of paper, and breathed a faint sigh of relief.

Yet in spite of my attempt to be quiet, the unseen figure heard me because the legs flinched and the pile moved slightly, but not enough to uncover the man himself.

Not that it mattered because he spoke at that moment saying, "Writer at work... no disturbing the creative process..."

"Yeah right," I shot back with a huge grin, "You're getting high off the ink fumes again, Uncle Nathan."

An arm shot out of the pile, pointing an accusing finger at me.  "Hey, I thought we agreed you were going to drop the 'uncle' part."

"Well don't let it happen again," the finger shook at me.  "Now be a dear and help me out from under all this."

Taking the extended hand I pulled Nathan out from the pile and then proceeded to help brush him off.  "What were you doing under all that garbage?" I asked.

"Trying to overcome a serious case of the dreaded 'Writer's Block'," he replied with a yawn.  "I've been trying to get past it for a week now.  I thought burying myself under all my failed attempts might allow me to sort through them mentally, so I could find a way forward finally."

"And instead you wound up falling asleep," I pointed out.

Drawing himself up to his full 5' 7", which is only an inch taller than me, he said in a dignified voice, "For your information I was meditating."

"Really?" I replied looking absolutely fascinated, "I always thought people who were meditating chanted 'Om'.  I never heard of anyone using snoring instead.  Must be a New Age thing."

Nathan made a face at me and then surveyed the clutter around us and shook his head.  "Unfortunately, whatever I was doing didn't help.  I'm still stuck."

"Maybe you should get white board and try jotting down some steps," I suggested.

"I don't do white boards," he shook his head, "The pen fumes give me a headache.  Although I do have a blackboard in another room, but that hasn't been helping much either."

"Let me take a look, maybe I can come up with a suggestion," I offered.

"Trust me you don't want to go inside that room," Nathan told me.  "I went a little overboard in there."

I rolled my eyes at him.  "You haven't seen some of my friends' bedrooms.  Trust me I can handle any mess you've got."

With that he led me out of the room with the papers and we headed down the hallway to a closed door.  "You're sure you want to go in there?"

Nodding, he pushed the door open and I walked inside.

For a moment I thought I'd stepped into the opening of one of my father's favorite shows... 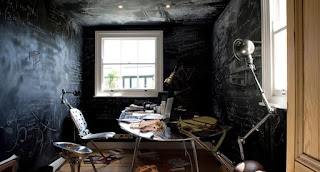 The entire room, save the floor, had been covered in blackboard paint, turning all the walls and even the ceiling into gigantic, fully usable, blackboards.  And every one of them was covered in writing.  I kept expecting Bart Simpson to step out of the corner at any second.  The only thing that saved me from that idea was the fact that none of the sentences or drawings were being repeated.  In fact, the room was starting to remind me of my physics teacher's classroom.  There were always notes, calculations, and other scribbles all over every blackboard in the place.

But now my eyes were really taking in the actual words and I could see Nathan was indeed dealing with a very involved scene.  "How many characters are in this thing?" I asked finally.

"Too many," he sighed, "I'd brought one character from another part of my series into this one because the plot wasn't going anywhere at first.  But one I brought him in, the ideas came pouring out of me.  Things were going great, but then I started noticing the word count and realized, the book was going to be much longer than I'd originally pictured."

"How much longer?" I asked staring up at the notes he'd left on the ceiling.

"I was already 70,000 words into the story, and I still hadn't reached the halfway point," he answered looking around dismally.  "I've spent so much time getting everyone acquainted, and then exploring how complicated their relations might be, that things kind of stalled in the main story line itself."

I nodded and studied the walls some more and could see just how complicated things were.  "Had you thought about breaking it up into two books?"

"Yeah, but that would screw up the actual plot and I don't think my readers would appreciate it," Nathan replied.  "And quite frankly, I wouldn't be happy about doing that either.  It would ruin the flow of the story."

"I can understand that," I told him, "How important is the character you brought in to the story.  Is he vital?  Or was he just a plot device to help things along?"

"Plot device," he answered,  "Why?  Do you think I should remove him entirely?  He did help inspire a lot of new scenes that got the story going again."

"Yeah, but you still wound up hitting a wall and a huge word count," I pointed out.  "Can any of the previously existing characters still serve the same function to keep those ideas in place?"

Nathan's brow furrowed as he thought about it.  "Actually, they could.  And a huge part of the word count comes from the character I introduced interacting with the others."

"And if you took him back out entirely, would that help the word count?"

"Let's find out," Nathan replied and led me back to the room where I'd found him.

Opening up his laptop, he pulled up two chairs so we could sit side by side.  Then his fingers began flying over the keyboard in a blur. 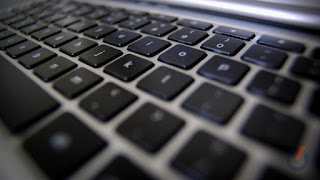 Now, I consider myself a fast typist, but believe me when I say, I'm like a tortoise in slow motion, compared to Nathan.  I'm almost surprised the computer itself can keep up with him.

Within half an hour, we've removed all references to the character he'd added and reallocated the plot devices he'd helped inspire, to some of the supporting cast who already existed in the story.  And sure enough, we'd lopped off over 30,000 words from the story, making it sleeker and faster paced.

By the time we were done, Nathan was looking much happier when we stepped away from the computer and headed downstairs.  "That was a huge help, Lisa.  Thank you so much."

I waved my hand and said, "It wasn't that big a deal."

"I beg to differ," he insisted, "Look, even after publishing a dozen books, I'm still learning about writing.  There's no one straightforward path that anyone can take.  It's a learning process that never ends.  A writer is always discovering something new they'd never thought about before.  The same thing holds true for artists who sculpt or paint.  In spite of all the techniques you know, you always find some new trick or effect you've never tried before that gives your piece a whole new look."

That made me think, about my own artwork and special effects make-up I'd been working with, and I realized he was right.  Creativity is a never ending learning process.  You always want to try not to simply copy what you've done before, but create something new and original that makes people smile and stare in wonder at your work.

****A quick note from the author: The basis for this entry came from a recent experience of my own.  As many of you know, I had planned to bring Nathan into the novel "The Door" which stars several of my other main characters.  I'd been having trouble moving the plot along and had decided to bring him in to help open up new avenues and it worked.  However, the length of the book was becoming too unwieldy and I was finding myself being sidetracked by too many new ideas.  So I sat back and re-examined the story and found that much of what Nathan was doing in the story, could be done by existing supporting cast members, so I decided to remove him entirely from the piece.

Now, many of you may find this disappointing because you were eager to see him in a full-length novel before this year was out.

Well then you'll be pleased to hear that this will still happen.  "The Door" is still not finished, but "The Vampyre Blogs - Coming Home" is nearing the end of it's 2nd revision (which is why I haven't been posting here more frequently, it's been a very time consuming process).  Next month I'll be sending it out to beta-readers, and based on the feedback we get, I will do a 3rd/final revision and release the book in October.  So we're just 5 months away from Nathan's debut novel.  As for "The Door", if it's ready in time, I'll release it in December or early next year.

So keep visiting, more short stories are coming soon.  In fact, you'll soon be reading entries by my wife, Helen, who is co-authoring the "The Vampyre Blogs - Coming Home" with me.  I think you'll like what she has in store for you all.

Thanks again for all your patience and support.

Posted by Allan Krummenacker at 10:42 AM No comments: