Once more, with the permission of Nathan and the rest of the cast here at the Vampyre Blogs, the author has a few words about what you can expect to see here in the coming year: 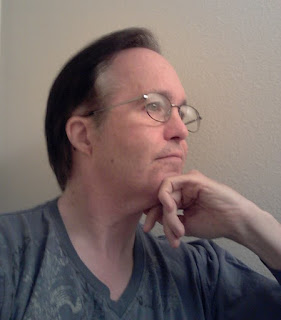 As the New Year draws closer, I have been thinking a great deal about my writing and in particular about "The Vampyre Blogs - I: Coming Home".   As you can see just from the title I've begun making changes.  I wanted to make it clear to anyone not already familiar with this blog, that this first book is the beginning of a series that will continue for some time to come.  Or at least, that is my hope.  Nathan and company have already assured me that they have many stories they want share both on the blog and in book form, so I feel safe to say that this series will continue to grow.

Currently, I've finally begun work on the cover of the book.  I know a number of you are already familiar with this image that I made using Adobe Photoshop:

While interesting, it also shows that I did not have a completely clear idea of where the story was going to go when I began writing about Nathan and his friends.  But since I've had the chance to tell so many short stories here on the blog, as well as finish a first draft of the novel, I have a much clearer vision of the kind of image I wanted for the book.  Plus, a number of readers who are already familiar with my other two novels "The Bridge" and "The Ship" expressed a desire for me to continue rendering the covers myself as I have for those novels.  I always work in soft pastels, but had a difficult time coming to grips with what the image should look likefor this book.  I wanted it to come from the story itself, a scene that takes place which not only catches the eye but captures the imagination.  Here is a sneak peak of the cover as I continue to work on it: 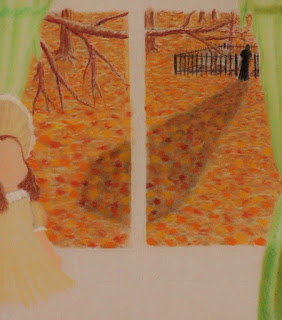 Rest assured there will be quite a bit more tweaking to the piece and reworking the foreground colors.  But I am very pleased with how I captured the fall leaves on the ground and the family plot located in the back of Nathan's family manor.  As for the doll... well that would be telling at this point, but rest assured its presence is a foreshadowing of things to come in the story.  However, I will share with you that the manor is not quite as empty as Nathan has believed for the last 150 years...

Anyway, the next thing I wanted to share with you all is the fact that my name will not be the only one appearing on the book cover.  For some time my wife Helen has been my biggest supporter and helper in more ways than one.  Not only have I used her for a sounding board, but she has also played a critical role in the scientific aspects of the Para-Earth Series (which this book and blog are part of).  It has been through her vast knowledge of science and fiction that I've been able create Nathan's condition, as well as coming up with visions of what some of the other Para-Earths are like: the kind of life forms that evolved for instance and why it happened.

But most important of all, she created a character who you've met on this blog before.  Professor Otto Hofstadter,was a character she literally dreamed up one night, long before I settled on the idea of doing a vampyre piece.  In the dream, one of the main characters from "The Bridge", Police Sergeant Veronica Ross, encountered him at a crime scene crouching over a dead body.   Of course in the dream Veronica had no idea that this strange little man who appeared to be in his 50's had nothing to do with the victim's death.  So it was only natural that she drew her weapon and told Otto to freeze and put his hands in the air.  She was totally unprepared for Otto to put a finger to the side of his nose and do a back-flip out of the window behind him and nail the landing two stories below.  Furthermore, she certainly wasn't expecting this strange older man to race across the lawn, jumping over objects and the fence like an Olympic athlete and disappear into the night. 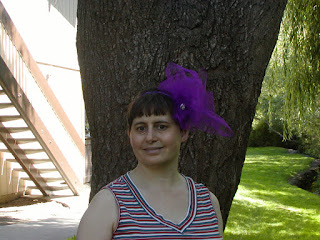 As for Helen, she only had one name for the fellow when she woke up "The Professor".  Since then she's fleshed Otto's history and personality out quite a bit, and he plays a pivotal role in the upcoming novel itself.  So it is only right, in my opinion, that her name will appear alongside mine on the cover of the book and all those that follow in "The Vampyre Blogs" saga of my Para-Earth Series.

We have plans for Otto in stories of his own as well and will be partnering him with two of the supporting characters from my second novel "The Ship".   I'm hoping to have Otto share a couple of his own stories here on the blog as well, so keep an eye out for them because he has a number of good stories (and sometimes, embarrassing ones) about Nathan.  I hope you'll find him as fascinating and amusing as I have.

So now you know what to expect in the coming year and those that will follow.  As I've said before, Nathan and company, have many adventures to share with us all and I for one am looking forward to them.

I do not know if I'll have time to post another entry here before New Year's Eve, but in case I don't I wish to leave you all with this image... 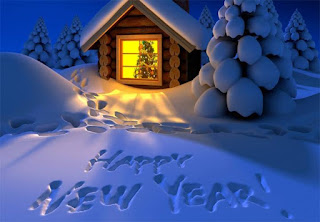 Posted by Allan Krummenacker at 11:58 AM